The popularity of superhero movies has grown significantly in the past 5 years and, so far, there is no sign of them slowing down anytime soon. The genre has done justice, occasionally, to some of the most beloved comic book characters and has invited newcomers to the universes of Marvel and DC. The CW’s Flash has certainly dominated the small screen and the Marvel Cinematic Universe (MCU) has certainly etched their mark on the big screen. One of the latest superheroes, in fact heroines, to join the family is DC’s Supergirl. Unfortunately, this show has earned mixed reviews from critics, fans and causal viewers. Critic’s reviews often suggest that the show is too quirky with a weak plot. Fans urge that Supergirl’s writers have not done justice to the comics and criticize its upbeat, jolly tone. The causal viewer has often, of course, argued that the show is “stupid” or “sooo stupid” to emphasize its senselessness. These reviews, all of which are harsh, are what stopped me from watching this show’s pilot and the succeeding episodes. But a feeling in my gut, as a comic book fan, told me to give it a chance. What do I think about it so far? I think this show is great and if haters disagree, please let me defend my belief.

Superheroes often deal with the immense pressure of fighting crime while hiding who they truly are behind the public eye, their friends and sometimes close family. The writers of modern day comic book shows often exaggerate the burden of being a hero too much or seek an emotional response from the viewers. The best example is most likely the CW’s Arrow where viewers may grow fatigued with Oliver and his moping attitude when he faces a difficult task or when a close friend/family member is in danger (again). The writers of Supergirl, on the other hand, have effectively established Kara’s multidimensional character without requesting too much empathy from the viewers. Kara’s detrimental past of losing her family after her planet Krypton exploded is a recurring subject on the show but is not referred to an extent where viewers may grow too sick of hearing the same story.

In addition, the public response of the existence of heroes is quite an essential component of their stories and unfortunately is not too evident in small screen iterations of our heroes. Supergirl however, effectively includes media giant KAtco (where Kara works) to their advantage and effectively portrays how the existence of a superheroine would be documented across multimedia platforms in the real world.

The Flash probably has one of the strongest supporting cast members of all the superhero/comic book shows to date. Barry Allen’s friends and family are complex, have compelling stories and always add to the shows loveable and amusing atmosphere. The Flash’s characters however, like most shows in its respective field, often revolve too much around their protagonist which often hinders the full potential of the show. Supergirl, on the other hand, surrounds its protagonist with complex characters whose backgrounds are both intriguing and well established, such as Kat Grant’s. Although dedicating large sections of the show to supporting characters may be seen as bad, it does build on the atmosphere of Kara’s life as well as the setting of the show, National City. 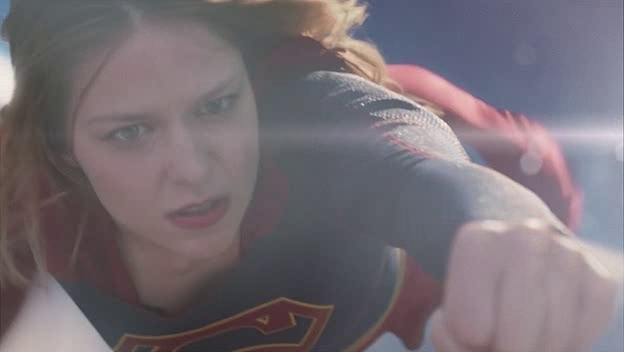 The making of television series/movies is under appreciated by the casual viewer too often. As an avid watcher of the medium, I can safely say that the production of a movie or show is what I often admire the most. Production meaning the process of editing, practical effects, visual effects, action sequences, etcetera. Supergirl of course has been critiqued and attacked for its “laughable” and “pathetic” action sequences. As an open minded viewer of television I understand that Supergirl is not going to have the best special effects or fighting sequences because it’s on a prime time budget! That being said, I cannot help but be extremely impressed with the special effect.  As for the action scenes, it’s apparent that Melissa Benoist has put in her best effort to become a believable fighter and as the show progresses her punches and kicks grow more realistic, as would a real superhero’s. I also have nothing but respect for the effects team and their ability to make Kara’s flight scenes as authentic as possible. Kara’s first encounter with her villainous Aunt Astra, for example, was probably one of the most well done action sequences in any of the superhero television shows, disregarding Daredevil’s hallway scene of course.

P.S. it’s more believable than Arrow where Oliver can dodge bullets with no superpowers and flip over grown men with a single hand.

Indeed I previously stated that today’s superhero shows exaggerate the emotional burden that the protagonists face but Supergirl, thus far, has not done this. Supergirl depicts/establishes the protagonist’s emotional baggage, if you will, better than other superhero show to date (notice how I have been saying this quite a lot). The instance I am referring to is when Kara (Supergirl) is incinerating Red Tornado (RT). Here we see Kara screaming at her pain, her horrific past, he anger at those who degrade her and at those who believe that she cannot fight because she is a woman as she fights RT whilst a very lyrical score plays. This is, hopefully, depicted strongly in the gif above where Benoist’s performance should evoke the slightest bit of empathy for her character.

A main theme in this show is the empowerment of the female. Kara deals with major backlash from the media who believe that a woman cannot defend their city. In addition, Supergirl is often compared to her cousin Superman when she does not/ cannot fulfill a task as good as he does. The effects on Kara or visible to viewers and it’s great to see when she overcomes these critics, rises above the occasion and proves the men who degraded her wrong.   Supporting character Kat Grant also presents a strong female who is a role model to both Kara and for young female viewers at home. Like most superheroes, Supergirl also proves to be a role model for the average Joe and suggests that we all can be heroes but it’s up to us to find the hero within us.