I watched Batman vs Superman and I can say I really enjoyed it as a comic book fan. I loved Batflek and the themysciran in red practically saved the movie. Wonder Woman is one of my favorite heroines (along with Scarlet Witch, Rogue and Captain Marvel) so I was more than elated to see justice done to the character in B v S!

But did I love B v S as a cinephile? Not so much. I could go on about how cinematically this movie was not up to par and how it was another one of Zack Snyder’s CGI messes. However, my biggest issue with B v S is not how it stands as a film but how “comic book fan” Zack Snyder set up this “superhero” universe (verdict: poorly). Thus, below are my main reasons to why I was not fond of the young DC Extended Universe.

1.Henry Cavill’s Superman is NOT a hero

P.S. I do not blame Cavill but the writers

In Snyder’s Man of Steel Superman was simply a monster. His fight against Faora destroyed Smallville and he leveled Metropolis during his fight against General Zod. In both these events he was fighting against strong opponents so of course he did not intentionally destroy towns and cities.  What made him a monster was the corollary of each of these events. To elaborate, “Superman” received affection after each devastating event which transpired.

In B v S the same traits of “Superman” in Man of Steel are replicated. Superman has yet to say to an individual “no need to fear” or “I’ve got you” (these are corny phrases and they do not need to strictly said as such) but he has just continued to destroy cities in masses. “Superman” saved a girl in a burning building in B v S but no words of reassurance were given to her (yes there was a language barrier but that’s not an excuse). In the first act “Superman” drives a MAN, not a super villain, through four walls of concrete for holding a gun to Lois’s head (he has super speed he could’ve snatched the gun before the man even blinked). But where was the justice in, assumingly, killing a man? Superman can fly. He leaves those around him in stupor. He is the man of wonder. But frankly, Snyder and the writers of B v S misunderstood the meaning of Superman. As I am a fan of cinematic realism, look back at these events presented and you probably would be absolutely terrified if these events occurred in our reality. Wouldn’t you want a word from the man who “saved you”? Superman is justice, superman is love, the Superman above is far from that.  If this explanation was not clear I highly recommend you watch these 3 minute videos (The Mythic Poetry of Comic Book Films  and Clark Kent is Superman’s True Identity) by one of my favorite YouTube channels Nerdwriter1 to better understand the power of comic books, the meaning of a hero, and the power of Superman.

2.Is anyone in Batman vs Superman a hero?

As much as I liked Batfleck he was just as little a hero as “Superman”. Batman is indeed a vigilante but he does not kill. In B v S he is murdering people left and right. Again, The Dark Knight is one of justice yet where was the justice in gunning down individuals in this film? Yes the plot insisted that his dark past led him into the murderous vigilante but with no real explanation to why (Wonder Woman, who I loved, did not save anyone which I am fine with because it would have tampered with the narrative of the film) However,  in the Marvel Cinematic Universe, which has well established itself, the Avengers destroy and kill innocents as much as Superman. Heck they have done it three times (New York, Wakanda and Sokovia). So how are the Avengers heroes and Batsy and Superman are not? Forget words how about images?

We going to level a city, might as well save as many people as possible

3.Lastly,  I never felt I was in a comic book universe

I do not wish for the DCEU to emulate the MCU or Fox’s X-Men universe. I want individuality and a distinction between all three. But is the DCEU’s different style good? Zack Snyder’s color pallet is dark and gray. I used to have a problem with this but it has grown on me. Yet I do ask that he brighten up the heroes more (superhero’s are bright and lively). Currently the hero’s costumes replicate their universe, but imagine how unique and intriguing it would look if the universe was dark and gritty and our beloved DC heroes wore brightly colored costumes to stand out? Wouldn’t a difference in the heroes colorful costumes emphasize the fact that they are “super” if they looked disimiliar from their universe?

The Reds and Yellows of Iron Man

Natasha stands out in the dark

The beautiful colors of the vision 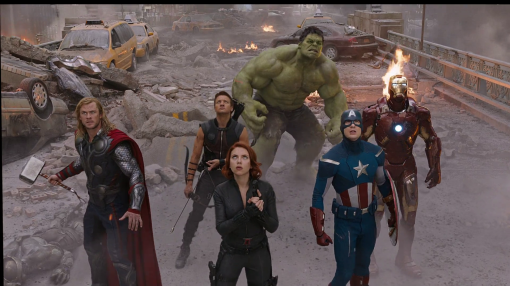 The Vision’s Red and Yellow

I honestly do not want the DCEU to be like Marvel but I want to feel like I am immersed in a world of heroism. Although it is Batman vs Superman, they are Batman and Superman (they save lives).  Superheroes to me are beings of wonder, they mean something to me on both the personal and moral level. I want to know your opinions on BvS and even what it means to be a hero!